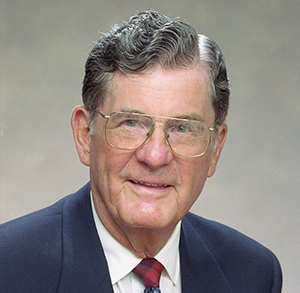 "He literally broke the ice between town and gown."

Ray Solomon’s career at Florida State spanned 35 years, beginning in 1962 when he joined the teaching faculty at the College of Business. Highly regarded by both students and faculty members, he went on to become dean in 1974 and was the college’s longest serving dean to date. He stepped down in 1991 to become the college’s first Midyette Eminent Scholar in Risk Management and Insurance. He retired in 1997.

During Solomon’s tenure as dean, the School of Business became the College of Business, undergraduate enrollment increased significantly, and the college expanded and diversified by adding many new majors. Solomon was instrumental in the development of the Real Estate program, which now ranks in the Top 10 nationally, and a number of other new academic majors. The graduate programs, both master’s and doctoral, grew and flourished during this period. In addition, he played a large role in guiding the philosophy of “individual attention” that has been one key to the college’s success.

“Dean Solomon did much to move the college up and help it earn more respect, locally, regionally and nationally,” said a former colleague. “Even before becoming dean, he made a major impact on the college relative to the community of Tallahassee. He was among the first faculty members to build a major bridge between the two. He literally broke the ice between town and gown.”

Another former student and now president in a leading insurance research organization said: “Dr. Solomon was an exceptional example of an individual who made significant contributions to his academic field, the administration of the College of Business as dean and as a mentor and leader for his students. He could be characterized as an individual who was both strong minded, but kind hearted.”

He earned many honors during his time at Florida State, including the Vires Torch Award from the FSU Faculty Senate and the Ross Oglesby Award for Outstanding Contributions to Students. In 2012, Solomon received the Florida State University Circle of Gold Award, which "recognizes worthy individuals who, through their service and achievements personify the university's tradition of excellence.”

His community service recognitions include the Distinguished Service Award by the Florida Association of Life Underwriters, Outstanding Trustee by the Tallahassee Memorial Hospital Foundation and the Philanthropist of the Year Award by the Big Bend Chapter of the Association of Fundraising Professionals. In addition, the Southern Scholarship Foundation established the annual E. Ray Solomon Community Service Award.

After his retirement, Solomon continues to take on leadership roles in community organizations, such as Goodwill Industries of the Big Bend, the Economic Club of Florida, the Tallahassee Memorial Hospital Foundation, and the Southern Scholarship Foundation, among them.