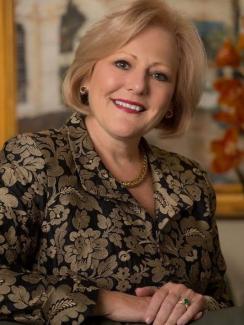 Nan Casper Hillis of Tallahassee earned a Bachelor of Science Degree from Florida State University’s College of Business in 1976 with majors in marketing and finance.

Nan and her husband, Mark, have established 7 endowed scholarships for students at FSU and 1 professorship in Real Estate in the College of Business. Additionally, they have donated to the FSU Alumni Center, the new College of Business Building, Legacy Hall, and the Veterans Legacy Complex.

Nan serves as the Secretary of the FSU Foundation Board of Trustees, serves on the FSU Veterans Alliance Advancement Council and the FSU Heritage Museum Advisory Board. Previously she  served on the FSU Alumni Association Board of Directors, the FSU College of Business Board of Directors, co-chaired the $600 million FSU Connect Capital Campaign, and served on the $1 Billion  FSU Raise the Torch National Capital Campaign Committee.

Nan is the recipient of the FSU Alumni Circle of Gold Award, the FSU Faculty Senate Mores Torch Award, the FSU Real Estate Network Award, the 2019 FSU Panhellenic Alumni Advisor of the Year Award and is a member of the FSU College of Business Hall of Fame.

In addition, Nan is active in the community as evidenced by service on the National Board of Directors of the Girl Scouts of the USA and currently, the City of Tallahassee Investment Advisory Committee. Other board service, committees and recognitions are itemized below

•    FSU Panhellenic Alumni Advisor of the Year (2019)
•    FSU Faculty Senate Mores Torch Award symbolizing respect for customs, character and tradition in recognition of Mark and my commitment of time, talent and financial commitment to the university (2018)
•    FSU Real Estate Network Award in recognition of Mark and my generous contributions to the FSU Real Estate Program (2017)
•    Theta Chi Fraternity Carnation Award for support of the ideals of the national fraternity (2016)
•    FSU College of Business Hall of Fame (2016)
•    Tallahassee Democrat 25 Women You Need to Know (2016)
•    Association of Fundraising Professionals Big Bend Chapter Heart of Gold Award to Mark and Nan Hillis in recognition of their valuable contributions to the FSU Foundation (2015)
•    Diamond Award, Woman of Distinction, Girl Scouts of the Florida Panhandle (2014)
•    Woman of Distinction Award by Girl Scouts Citrus Council, Orlando, FL (2012)
•    FSU Alumni Association Circle of Gold Award for individuals who, through their service and achievements, personify the university’s tradition of excellence. (2009)