Florida State University granted an Honorary Doctor of Humane Letters degree Monday, March 25, to alumnus Allan G. Bense, a prominent Florida businessman, former speaker of the Florida House of Representatives and former chairman of the FSU Board of Trustees, in recognition of his years as a dedicated public servant and his devotion to his alma mater.

Bense received the honorary degree during a ceremony in FSU’s Heritage Museum surrounded by family, friends and state leaders. President John Thrasher presided over the event.

“Allan Bense deserves every bit of credit that’s been given to him here today,” Thrasher said. “We here at Florida State University are the benefactors of your strong leadership and your unconditional devotion to your alma mater and indeed, our state.” 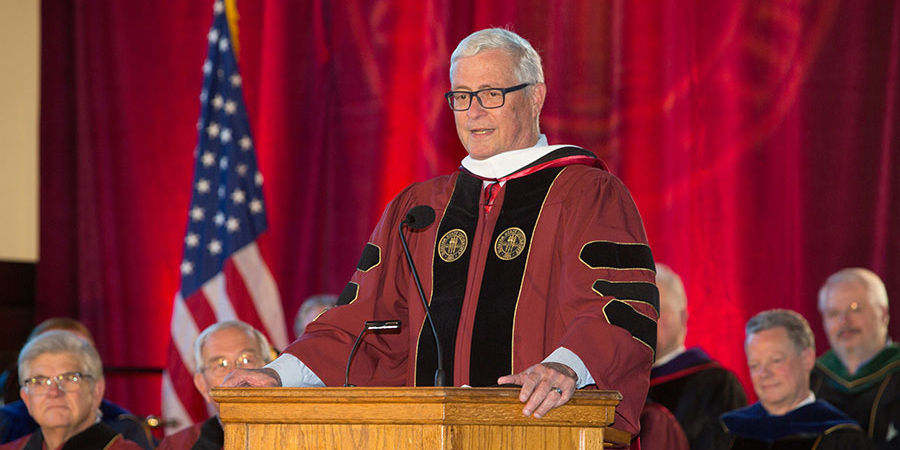 Bense’s leadership, mentorship and friendship were constant themes shared by guest speakers during the ceremony. FSU Board of Trustees Chairman Ed Burr who succeeded Bense in the role was among those who spoke.

Bense was appointed to the FSU Board of Trustees in 2011, which he served until 2015.

A native of Panama City, Bense worked his way through Florida State, holding odd jobs as a janitor and gas station attendant. He earned two degrees at FSU, receiving a Bachelor of Science in 1972 and a Master of Business Administration in 1974.

Bense went on to become president and partner of GAC Contractors in Panama City, as well as CEO of Bense Enterprises, which is involved with road building, mechanical contracting, insurance and golf courses.

He entered the political arena with aspirations of making a difference for fellow residents of Bay County. In 1998, Bense was elected to represent Florida’s 6th District in the Florida House of Representatives. He served in the Florida House until 2006 and as speaker from 2004 to 2006.

Will Weatherford, who worked for Bense while he was speaker, and is married to Bense’s daughter, Courtney, also offered remarks.

“Only a 24-year-old would be stupid enough to ask the second most powerful person in the state of Florida if while they worked for their boss, could they date their daughter,” Weatherford said. “But I was very happy I was fool enough to make that ask, and I thank God every day that he said yes.”

Weatherford, who went on to become Speaker of the House in 2012, said he was grateful that Bense allowed him to not only date his daughter, but ultimately marry her.

“What do you say about somebody who has fundamentally changed the trajectory of your life,” Weatherford said. “He’s been a mentor in every sense you could possibly think about.”

Weatherford said that over the years Bense taught him about the value of humility, the importance of cooperation, courage and stewardship, and how to love and lead a family.

Since his time in public office, Bense has continued to use those values to make a difference in his Panama City community, especially in the wake of Hurricane Michael. Mike Cazalas, the managing editor of the Panama City News Herald, shared stories of how Bense provided financial assistance for families in need after reading about their stories in the paper.

“I could fill this room with families and children who he has done that for over the past five years,” Cazalas said.

Bense is the 130th person to receive an honorary degree from either Florida State University or one of its institutional predecessors since its founding 168 years ago.

Mark Riley, dean of the Graduate School read the guidelines of receiving an honorary degree. Provost Sally McRorie read the citation and Thrasher hooded his longtime friend as he conferred the honorary degree.

“I’m just flattered and humbled,” Bense said. “I don’t understand totally why this was awarded to me, but I’ll take it any way.”

The humble businessman is an ardent supporter of Florida State, FSU Panama City and the Seminole Boosters. The atrium in the Holley Academic Center on Florida State’s Panama City campus, where he served on the development board, is named in Bense’s honor.

Bense said one of his greatest achievements in serving Florida State was assisting his alma mater in securing $10 million for the National High Magnetic Field Laboratory from the legislature in 2006.

He told attendees that of all the successes, wealth and power that he’s accumulated over the years, the one thing he’s learned is that if you help make other people successful, you’ll be successful every time. Reflecting on his own story, Bense shared some other tips for a successful life.

Nominations are considered at any time of the year. In general, the committee intends to honor people of outstanding achievement who have gained national or international recognition or made a significant scholarly, creative, public, business or humane contribution to the United States or to Florida State University.

Top undergraduates to benefit from more pathways to a graduate degree

When the tank is empty: What causes medical professionals to feel drained of compassion?