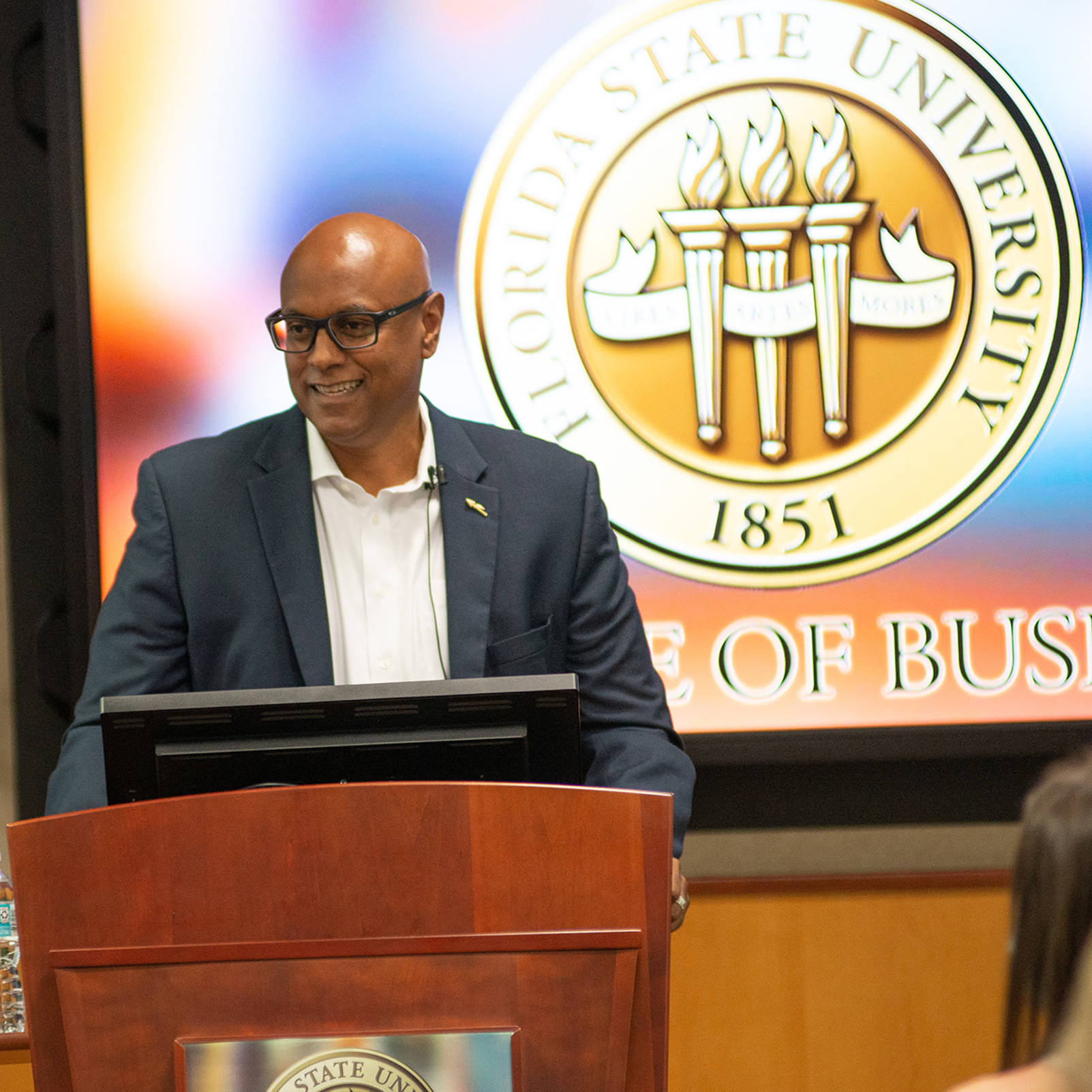 "Especially when it comes to education, if there's some way I can benefit the next generation and I can do it, I'll do it," he says.

Florida State University concurs -- because he did it.

Persaud, CEO of Tampa-based MidFlorida Armored & ATM Services, recently made a significant gift to name a classroom in Legacy Hall, the future home of the College of Business.

Persaud said his gift came in response to a request from the college, which asked if he would consider making a gift in a space that would bear his name.

"'Absolutely,'" he said, recalling his reply. "Whether my name is on it did not make any difference to me. It's just investing in our future."

Persaud joined an effort that the College of Business considers crucial to its own future. The college must maintain a steady stream of funding to break ground next fall on Legacy Hall, an $88 million facility that requires $44 million in private funding to match $44 million in committed government support.

Officials see the next-generation facility as certain to attract top-tier students and professors and to keep the College of Business on its upward rankings protectory.

"I love where they're headed," Persaud said, noting a No. 1 ranking among all schools for the college's Dr. William T. Hold/The National Alliance Program in Risk Management and Insurance and a No. 5 ranking among public schools for its Real Estate program.

Yet Legacy Hall offers many other giving opportunities, said Michael Hartline, dean of the College of Business. They include $15,000 to $100,000 for faculty and staff spaces, $100,000 to $250,000 for laboratory and technology spaces and $200,000 to $5 million for showcase spaces, which include the facility's atrium, student commons and multi-purpose room, among others.

"We're grateful to Danny Persaud for helping us keep the momentum going," Hartline said. "During a recent visit to FSU and the College of Business, Danny heartily engaged with faculty, staff and students, and he shared an appreciation for what's happening here, from our people and programs to our rankings and prospects. We celebrate and appreciate Danny's enthusiasm and generosity, and we hope it's contagious as we prepare to build our new home and continue our journey to preeminence."

‘It's in my soul to help'
Persaud says his generosity perhaps originates from childhood. He recalls an experience from age 7, when he and his family of five found themselves on the street.

Only months before, they'd immigrated from Guyana, in northern South America, with excitement for a new life in the U.S.

That cold winter night bore an entrepreneur, he said. It might also have produced a philanthropist.

"It's in my soul to help people," Persaud said during his recent visit to FSU, when he served as the featured guest in the College of Businesses' Charles A. Bruning Distinguished Speaker Series. "I don't know how it got there, if it was that moment when I saw my mom in tears, as if to say: ‘Where are we going to go? What are we going to do?' But she wouldn't tell us that.

"But if there's a moment that changed my life, it's that moment -- that uncertainty in a parent's face and in a new country and not knowing why you have a little bag in your hand full of a few little belongings, and you're on the side of the road, not knowing where you're going."

From an early age, Persaud knew where he was going. He bought his first piece of real estate at age 18. Four years later, he became a regional vice president of operations at an armored car company. There, he learned the business and in 2001 launched MidFlorida Armored & ATM.

He since has blazed new trails, starting businesses in cryptocurrency, financial services, commercial real estate and hempcrete, a construction material made from the hemp plant. Those and other businesses now fall under the umbrella of Persaud Holdings.

Persaud also has kept his flagship business moving. When he saw the negative effects of the coronavirus pandemic on the use of cash -- MidFlorida's lifeblood -- he saw opportunities in Bitcoin and pivoted: His company has installed Bitcoin machines throughout the state and sees continued growth in the industry.

‘We all go through something'
Yet during a September interview, Persaud turned the conversation away from his profit and toward his people. Despite dramatic falls in business and revenue, he kept all his employees during the pandemic, paying them for full days of work even when they'd work an hour or two, he said.

He even hired two more people.

"We promised them a job," he explained.

Persaud sits on eight boards, including the advisory board of the Jim Moran Institute for Global Entrepreneurship and others at Florida State University. He also serves on the board of Wheelchairs 4 Kids, which he cites among his favorite nonprofit organizations. His dad is a person with a disability, he said.

"People need help," Persaud said. "Whether you're successful and rich, or poor and hurting, you're always in a struggle. We all go through something in life.

He was that kid. Persaud recalled an effort to play football at FSU as a non-scholarship player. He said he briefly lived out of his car – "an old, beat-up Oldsmobile" -- as he sought financing for tuition and living expenses so that he could enroll in school and practice with the team.

After about three weeks, he said, he returned to his Tampa home and began to tackle a career.

But he never forgot FSU. He also never forgot his sister, who earned a bachelor's degree from the University of South Florida at age 19 – the age at which some people finish high school, he pointed out.

And he embraces a son who three years ago graduated from the University of Tampa, beating him to the achievement.

"I've done it backward," Persaud said, pointing out that he has achieved business and financial success before getting a college degree. "One of the things I've never achieved is that degree."

He said he plans to go after it -- to return to FSU to get a bachelor's degree, then an MBA from the College of Business.

"I actually reached out to Mike Hartline and said, ‘Hey, I think I want to come back,'" Persaud said. "If there's a challenge for me, that's the challenge right now."