Legacy Hall filling up with gifts to name classrooms 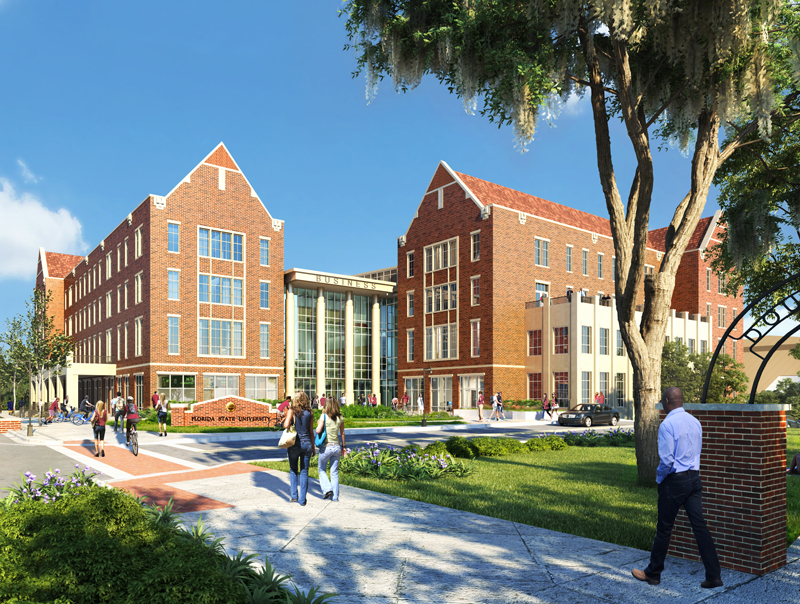 You might liken gifts to name classrooms in Legacy Hall – the future home of the College of Business – to a baseball announcer calling a home run.

“We have only three classrooms remaining,” said David VanLone, chief development officer of the Florida State University College of Business. “And we’re in a situation where probably one or two of them are going to go pretty quickly. That will leave us with a single remaining classroom, which is exciting!”

VanLone and other college officials say it’s exciting because donations to fund classrooms – plus multiple other academic, faculty and showcase spaces in Legacy Hall – demonstrate steady support from FSU alumni and other donors.

VanLone and others trumpet Legacy Hall as a state-of-the-art asset that will draw top-notch students, retain the highest-quality professors and keep the college on its upward rankings trajectory.

“We say ‘Wow!’ when we consider the long-term promise of Legacy Hall for the College of Business and our students, faculty and staff,” Dean Hartline said. “And we add another exclamation point when we see the gifts rolling in from our alumni and other friends of the college and university. Without them, Legacy Hall and the prosperous and exciting future it holds for the College of Business would not be possible. We remain grateful to every one of them.”

Of donors, VanLone said, “This is the first time we’ve asked them to fund an academic building, and it’s a unique opportunity -- it’s going to be the standard for the college for the next 75 years. The building is going to put us in position to catapult ourselves and really change the landscape.”

Legacy Hall received a significant boost in June when the Florida Legislature and Gov. Ron DeSantis approved a $30.5 million allocation for the facility as part of its 2021-2022 budget. That completed the state’s $44 million funding commitment and turned the project, in the eyes of donors, from ambitious dream to concrete reality, VanLone said.

Now that the state has put up half the money, he said, “it’s our job to find the rest of it to make this building happen. And we’re very close; we’re in the final stages. I think that’s why so many people are excited to jump on board now and see this come to fruition.”

Donors have given roughly $6 million for 21 classrooms so far, he said.

Many donors make such gifts because of special memories, experiences or inspiration, VanLone said. For example, one couple donated because they met in a classroom.
“There are lots of different reasons that basically harken back to what they got out of Florida State,” VanLone said of alumni donors. “And they want to give back – they want to provide this facility for countless generations of business students.”

VanLone said plenty of giving opportunities remain. They include $15,000 to $100,000 for faculty and staff spaces, $100,000 to $250,000 for laboratory and technology spaces and $200,000 to $5 million for showcase spaces, which include the facility’s atrium, student commons and multi-purpose room, among various others.

“We’re pushing hard to complete these final stages, get Legacy Hall funded and put shovels in the ground,” VanLone added.