Legends and Leaders: ‘You want to be extraordinary’ | College of Business 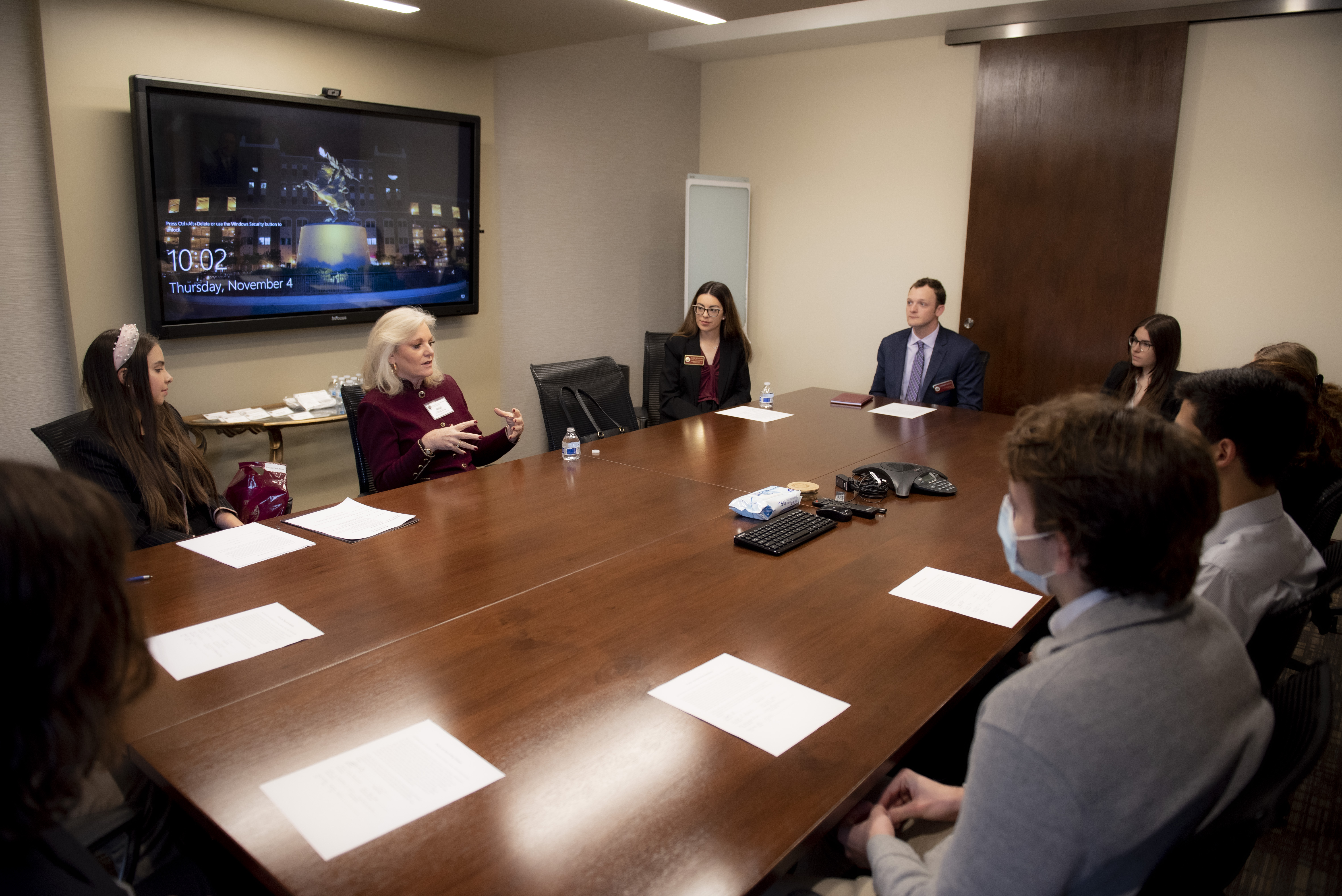 You might have heard about hundreds of staffing-related flight cancellations at American Airlines on the last weekend of October.

Anne Hamilton of The Walt Disney Company certainly heard about them.

“Our phones were ringing off the hook,” she said.

Hamilton spoke to College of Business students about her experiences as Disney’s vice president of global travel and expense management. She did so on Legends and Leaders Day when Alumni Hall of Fame members shared their professional insights and expertise in roundtable and classroom formats with students in the college.

Hamilton’s experience and expertise extend far beyond phone calls. One student asked her how many hours a week she works, for example.

“It isn’t about hours anymore,” Hamilton explained. “It’s about accessibility. As you move up in your role from a leadership perspective, the industries you’re going to are 24/7. That’s why my title changed to global travel and expense management. It’s global.”

Hamilton leads teams that serve the worldwide travel needs of workers and cast members of Disney, a massive multinational media and entertainment company that now includes Hulu, ABC and ESPN. Her teams manage transportation, lodging and vendor agreements. They drive travel-related technology solutions and maintenance of Disney’s travel policy and compliance, among other responsibilities.

“You’re looking at systems and processes and people,” Hamilton told students, once again emphasizing accessibility. “I give my team members a cell phone. Each one of them could get a call at any time, and we have to fulfill it.”

Legends and Leaders Day now happens each year on the day of the Alumni Hall of Fame Dinner and Induction Ceremony when new and previous inductees come to campus and make themselves available for a few hours of insight and leadership.

Michael Hartline, dean of the college, called the annual event a significant college tradition that gives students an opportunity to hear from and meet some of the most accomplished business leaders in the country.

“They’re Alumni Hall of Fame members who give back generously because they believe in what they do and believe in our students, college and university,” he said. “They play a significant role in the growth of our students and programs and in our march to preeminence.”

Hamilton (B.S. Hospitality Management ’79), a 2019 Alumni Hall of Fame inductee and a champion of women in business, led two roundtable discussions in which she told students about herself and her career and asked them what was on their minds.

She also shared what it takes to excel, as she has done for 25 years at Disney.

Other Hall of Fame members also led roundtable discussions or spoke to classes about topics such as leadership, risk management, strategic consulting and accounting information systems.

Tim Cole (B.S. Marketing ’79), a 2012 Alumni Hall of Fame inductee, led classroom discussions about consumer behavior and basic marketing concepts. In one of the classes, Cole shared his experience as former executive vice president of sales for Del Monte Foods.

Now retired from Del Monte and the principal at Crescent View Partners, he recalled ways in which Del Monte would market the quality and processing of its products, including peaches.

The company invited representatives of one grocery chain to visit Del Monte’s peach plant in California’s Central Valley, known as the country’s “salad bowl” and “fruit bowl.” Beginning at 8 a.m., the representatives would watch workers pick peaches. They’d follow the trucks for government inspections and deliveries to the plant. And they’d see the peaches canned by lunchtime, Cole told students.

“What we were demonstrating was that our processing was better and faster than the competition, because in that type of product, degradation starts immediately after you take it off the tree,” he explained. “So, the quicker you can stop that process by putting it in the can, the better.”

Talking to students in another room, Donna Abood (B.S. Marketing ’81), a 2013 Alumni Hall of Fame inductee, explored the “retrofit revolution,” as she called it, as part of a broad presentation about green trends in commercial real estate.

She said concrete represents 8% of the global carbon footprint, prompting some companies to try retrofitting rather than to build anew.

“It’s basically out with the new and in with the old,” said Abood, principal and managing director of the Miami office of Avison Young, a global commercial real estate firm.

But that’s often difficult from a cost perspective. Say a real estate company wants to retrofit its old building with an occupancy-sensor system that controls lighting, heating, ventilation and air-conditioning, or HVAC. Say that project costs the company $5 a square foot. Now say the market for that Class B office building remains $35 a square foot.

“They’re not going to get $40 a square foot on rent in a $35-a-square-foot market,” Abood said of the company. “So, we have these disconnects. We’ve got to try to figure it out as a community and how to fund it.”